Emerging Science is Leaving Many Wary

A variety of new biomedical technologies could be on the horizon and the prospect of a very different future of science have many people worried, if not skeptical. Made-to-order babies, super-implants, and synthetic blood are among the biomedical advances that could become mainstream within our lifetime. A recent study done by the Pew Research Center shows just how hesitant the general public is moving forward with biotechnology. 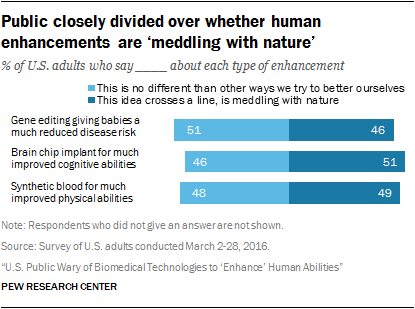 Many remain skeptical of emerging science like Gene Editing

Gene-Editing – Out of the three, gene editing is probably the closest to becoming a reality. Scientists now have the ability to edit the genes of embryos, essentially creating “designer babies” that have the ability to be altered to have specific looks and traits.

Although this technology will mainly be used to eliminate genes that could carry harmful diseases and disorders, many still view it as interfering with a natural process.

“That raises all kinds of very thorny, ethical questions,” says Professor of Law and Bioethics Max Mehlman in an interview with CNN. “One I’m chiefly concerned about is the way that could further divide us into the haves and the have-nots, because it’s unlikely people already at a disadvantage could afford, or have access to, those kinds of changes.”

Brain Chip Implants – Although it sounds like something out of a Michael Crichton novel, it’s possible that the future will feature brain implants to help cognitive learning and memory retention. These chips would decipher brain waves and

Designed as a way to give those without motor skills the ability to carry out daily tasks, many argue that this could lead to an eerie society filled with mind control and other technology. Is it possible we could essentially turn into these cyborgs with various technological implants?

Synthetic Blood – Synthetic blood is also in the works and has the possibility to change physical performance entirely. Trials have already begun using blood substitutes in various medical procedures. However, the poll shows that many people are still cautious about this future technology.

Synthetic Blood could be looked at as just another Performance Enhancing Drug (PED), but we still don’t know much about it. It could be argued that the biomedicine could create a class of super humans created by this new synthetic blood.

This technology is unlike any we’ve ever seen before. Many will argue, “Well, we were skeptical of computer and automobiles at first weren’t we?” While that is true, computers and automobiles don’t have the ability to change our physical form, or who we are as people.

“The real debate is about ability, expectations and competition, and who moves forward and who gets left behind,” Mehlman added. “Same with gene editing. The important part is that there would be a governance issue. We might use gene editing just for disease at first, but it could be used for more things without governance. So we need not just a safety debate, but also an ability-expectation governance debate.”

It will be interesting to see where technology takes us. No matter what, technology will become part of us – it will be up to us to decide how much of it we accept.